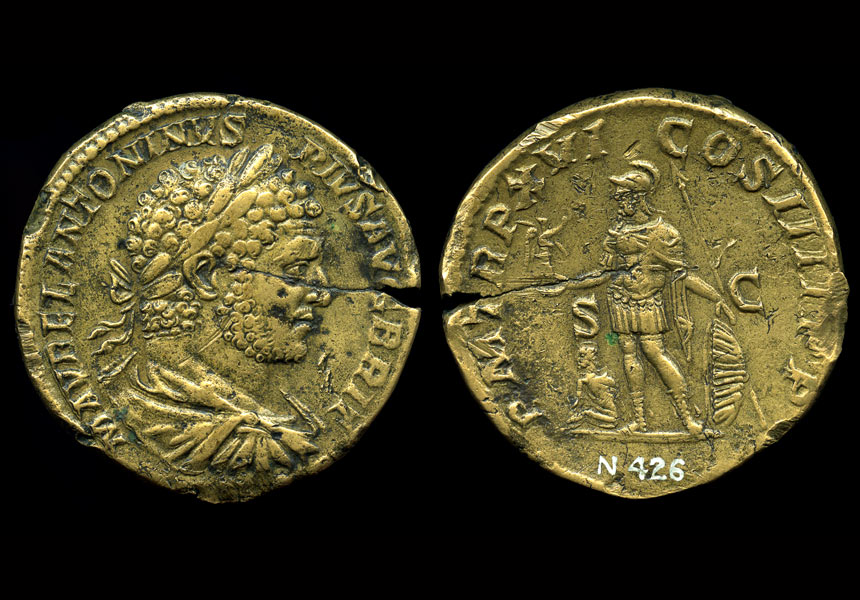 This collection of over 5000 roman coins boasts some very fine examples of copper alloy, silver and gold coinage. Spanning no less than seven centuries, the collection charts the Roman age; from the height of the Republic through to the rise and eventual dissolution of the Western-Roman Empire and the dawn of the Byzantine age in the east.

When the Romans invaded Britain in AD 43, they brought with them a monetary system which had been developing since the 3rd century BC. Although the tribes of Britain minted their own coins, the sophistication and versatility of the new model ensured that Roman coinage was rapidly adopted by the natives.

The Roman system, which comprised of the golden aureus (worth 25 denarii), the silver denarius (4 sestertii), the copper alloy sestertius (2 dupondii), the dupondius (2 asses) and the as, offered denominations which could be used for all manner of transactions, from large scale international trade - to the farmer selling his eggs and grain at the local marketplace. Smaller fractions known as semis and quadrans did exist, although inflation had rendered these almost redundant by the time of the invasion and they are not found in great numbers in Britain.

Roman coinage poured into Britannia with the army and other imperial staff. Through day-to-day transactions with the native population, coinage passed into everyday affairs. In the 1st century AD we can imagine a cold Roman legionary, struggling to keep off the chill of a British winter, using a portion of his 250-300 denarii-a-year pay to buy a 3 denarii tunic from a native manufacturer. The weaver could then take his or her pay and purchase a loaf of bread or a litre of cheap wine for as little as an as from a local vendor.

By the 3rd century this ancient system was failing. The denarius was overstruck and silver content was falling. At its height the Republic struck denarii at approximately 95% silver, by the time of Emperor Septimius Severus (AD 193-211) it was a little as 48%. In response to this crisis Emperor Caracalla issued a new coin, the radiate (the contemporary name is unknown). This coin was valued at 1.5-2 denarii and was to form a new backbone for the troubled economy.

Caracalla's measures failed. The 3rd century was marred by plague, violence and political instability. In a period of less than 70 years, approximately 37 emperors and usurpers grasped for power and the throne. In the face of these internal and external pressures the coinage was again overstruck, the radiate becoming an almost worthless copper alloy coin containing as little as 2% silver by the close of the 3rd century.

Various efforts to reform were initiated in the 3rd and 4th centuries; eventually a whole new system was introduced. A system based on the golden solidus, silver siliqua and copper alloy fractions, known as nummi (again the contemporary name is unknown), offered some stability. Despite minor alterations, this system held until the end of Roman rule in the west.