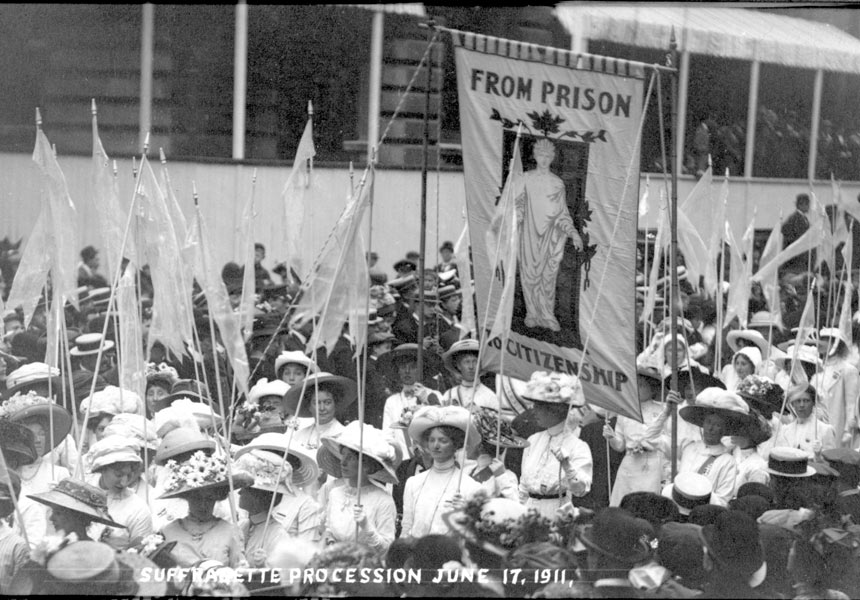 In 1903 the 'votes for women' campaign was energised by the creation of the Women's Social and Political Union (W.S.P.U). Founded in Manchester by Emmeline Pankhurst and her daughters, the W.S.P.U. aimed to 'wake up the nation' to the cause of women's suffrage through 'Deeds not Words'. The decision to relocate the headquarters to London in 1906 transformed the suffrage movement. For the next eight years, the fight to win the vote became a highly public and, at times, violent struggle played out against the backdrop of Edwardian London.

By taking their campaign to the streets, the Women's Social and Political Union attracted maximum publicity. Identifiable by their purple, white and green colour scheme, the suffragettes became a familiar sight in central London. The move to the political heart of the nation enabled the suffragettes to maintain a constant presence in Whitehall, petitioning Downing Street, heckling M.P.s and chaining themselves to government buildings.

A London base also provided opportunities for staging spectacular demonstrations. Women's Sunday in June 1908, the first 'monster meeting' to be held by the W.S.P.U, brought suffragettes from all over the United Kingdom to march in seven different processions through central London to Hyde Park. The highly choreographed demonstration attracted a crowd of up to 300,000, drawn by the spectacle of the delegates dressed in the suffragette tricolour and carrying over 700 banners.

The Coronation of George V in 1911 inspired the W.S.P.U. to organise its own spectacular coronation pageant. The four-mile suffragette Coronation Procession through central London culminated in a rally at the Royal Albert Hall and involved over 60,000 delegates dressed in national and historical costume.

The suffragette campaign was masterminded from W.S.P.U. headquarters, initially established at 4 Clement's Inn, Strand and, from 1912, at Lincoln's Inn, Kingsway. Both salaried and volunteer office staff organised fund-raising events, public meetings and demonstrations and produced the weekly newspaper, Votes for Women, which had a circulation of 22,000 by 1909. The W.S.P.U. established 90 branches throughout the United Kingdom but London remained the chief area of support with 34 local offices.

As the campaign became increasingly militant, over a thousand suffragettes, including Emmeline Pankhurst and her daughters Christabel, Sylvia and Adela, received prison sentences for their actions. Many were sent to Holloway jail in north London where they protested against prison conditions by enduring hunger strike and force-feeding.

The outbreak of the First World War brought an immediate suspension of militancy as the suffragettes threw themselves into supporting the war effort. The Women's Social and Political Union had not succeeded in achieving the vote but its campaigning style did ease the way for women to take a more active and public role in society during the war - a role that was acknowledged with the granting of the parliamentary vote to propertied women over the age of 30 in 1918.