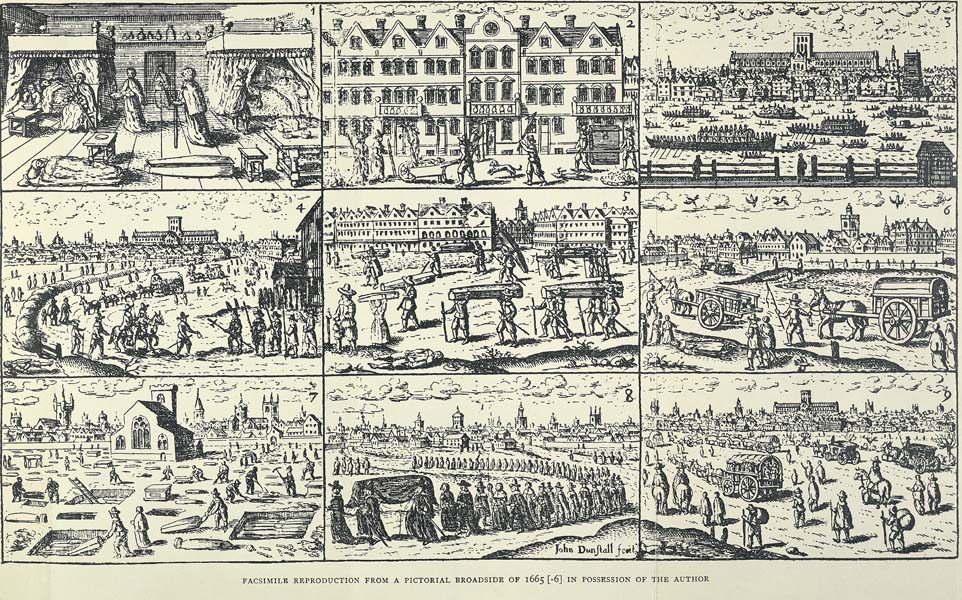 This was the last major epidemic of bubonic plague to occur in London, and marked the end of the Second Pandemic which had raged ever since the arrival of the Black Death in England in 1347. In the 17th century epidemics had already struck in 1603, 1622, 1636, and 1646-7.

The plague, and its other forms such as pneumonic plague, killed an recorded 68,596 people, but this is certainly an underestimate. The parish clerks compiled Bills of Mortality listing the causes of death and local victims of plague. The deaths of Quakers, Anabaptists and Jews were not recorded and many deaths from plague were attributed to other diseases, such as 'spotted fever'. Total deaths were probably around 100,000 Londoners.

Bubonic plague (named for the infected's large swellings or buboes) was caused by the Yersinia pestis bacteria, carried by the bites of fleas which in turn lived on rats. This was not understood in 1665, and Londoners blamed miasma (bad smells), cats or dogs, or poisoning of wells by foreigners. The reaction of many of affluent Londoners was to flee the city rather than try and help, and King Charles II and most of the court left for Oxford.

Broadsheet illustrations of the time show city authorities shutting up the houses of the infected. Once one member of a family has succumbed to the plague, they were all locked into the house to prevent the disease spreading. Most trade and business stopped, and even the poor tried to flee, although they were often turned back by people in the villages surrounding the city.

Samuel Pepys recorded the plague's impact in his diary on 16 September 1665: " Lord! How empty the streets are and how melancholy, so many poor sick people in the streets full of sores… in Westminster, there is never a physician and but one apothecary left, all being dead."

The death toll slowed over autumn and winter 1665, and in February 1666 it was considered safe for King Charles and his entourage to return. The plague had largely subsided by the time the Great Fire ripped through London in September 1666.