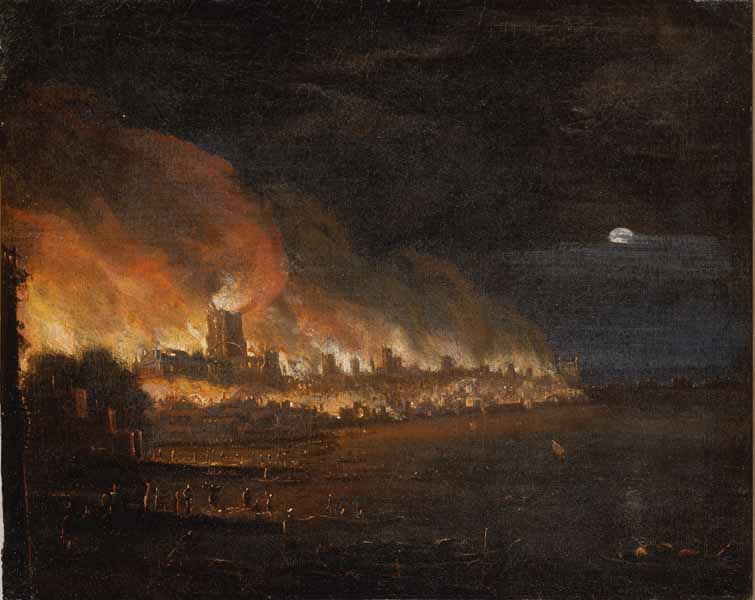 The Great Fire of London is one of the most well-known disasters in London's history, and permanently transformed the City of London's architecture. It began on 2 September 1666 and lasted just under five days. One third of London was destroyed, and about 100,000 people were made homeless, although there were far fewer deaths than might have been expected.

The fire started at 1am on Sunday morning in Thomas Farriner's bakery on Pudding Lane. It may have been caused by a spark from his oven falling onto a pile of fuel nearby. The fire spread easily because London was very dry after a long, hot summer. The area around Pudding Lane was full of warehouses containing highly flammable timber, rope and oil. A very strong easterly wind blew the fire from house to house in the narrow streets.

As the fire was spreading so quickly most Londoners concentrated on escaping rather than fighting the fire. They rescued as many of their belongings as they could carry and fled. Thomas Farriner and his family had to climb out of an upstairs window and onto their neighbour’s roof to escape the fire in their bakery.

There was no fire brigade in London in 1666 so Londoners themselves had to fight the fire, helped by local soldiers. They used buckets of water, water squirts and fire hooks. Equipment was stored in local churches. The best way to stop the fire was to pull down houses with hooks to make gaps or 'fire breaks'. This was difficult because the wind forced the fire across any gaps created. The mayor, Thomas Bludworth, complained, 'the fire overtakes us faster than we can do it.'

A quicker way of demolishing houses was to blow them up with gunpowder, but this technique wasn’t used until the third day of the fire (Tuesday 4 September). Fire Posts, each staffed by 130 men, were set up around the City of London to fight the blaze. On Tuesday night the wind dropped and the fire-fighters finally gained control. By dawn on Thursday the fire was out.

The damage caused by the Great Fire was immense: 436 acres of London were destroyed, including 13,200 houses and 87 out of 109 churches. Some places still smouldered for months afterwards. Only 51 churches and about 9000 houses were rebuilt. St Paul’s Cathedral was ruined, as was the Guildhall and 52 livery company halls. It took nearly 50 years to rebuild the burnt area of London. St Paul’s Cathedral was not completed until 1711.

Throughout 1667 people cleared rubble and surveyed the burnt area. Much time was spent planning new street layouts and drawing up new building regulations. By the end of the year, only 150 new houses had been built. Public buildings, like churches, were paid for with money from a new coal tax.
The new regulations were designed to prevent such a disaster happening again. Houses now had to be faced in brick instead of wood. Some streets were widened and two new streets were created. Pavements and new sewers were laid, and London’s quaysides were improved. The results were noticeable: '(London) is not only the finest, but the most healthy city in the world', said one proud Londoner.