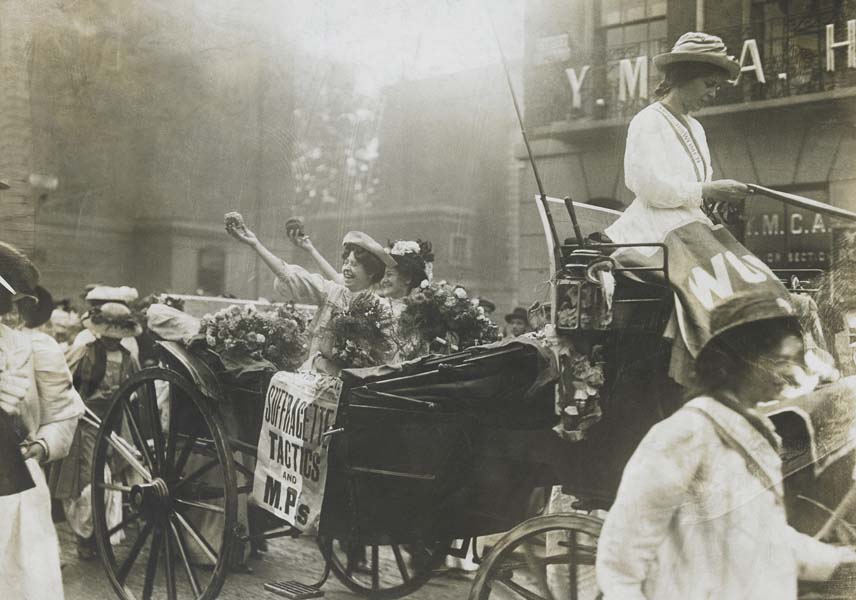 By 1900, women had been campaigning for the right to vote in British parliamentary elections for over half a century. These 'suffragists', who had campaigned in predominantly non-confrontational ways, were increasingly sidelined by the growing suffragette movement, whose members embraced more radical methods.

In 1903 the 'votes for women' campaign was energised by the creation of the Women's Social and Political Union. Founded in Manchester by Emmeline Pankhurst and her daughters, the W.S.P.U. aimed to 'wake up the nation' to the cause of women's suffrage through 'Deeds not Words.' The decision to relocate the headquarters to London in 1906 transformed the suffrage movement. Supporters of militancy and the WSPU became known as Suffragettes and for the next eight years, the fight to win the vote became a highly public and, at times, violent struggle played out against the backdrop of Edwardian London.

By taking their campaign to the streets, the Suffragettes attracted maximum publicity. Identifiably by their purple, white and green colour scheme, they became a familiar sight in central London. The move to the political heart of the nation enabled them to maintain a constant presence in Whitehall, petitioning parliament, heckling MPs and chaining themselves to government buildings.

A London base also provided a 'high profile' venue for spectacular Suffragette demonstrations and processions. Such events could draw a crowd of several hundred thousand spectators drawn to the spectacle of Suffragettes dressed in purple, white and green, carrying hundreds of beautifully designed banners.

The Suffragette campaign was masterminded from WSPU headquarters, initially established at 4 Clement's Inn in the Strand and, from 1912, at Lincoln's Inn Kingsway. Both salaried and volunteer office staff organised fund-raising events, public meetings and demonstrations and published newspapers and propaganda material. The WSPU established 90 branches through the United Kingdom but London remained the chief area of support with 34 local offices.

From 1912, the WSPU shifted the focus of its campaign to attacks on property and the disruption of public life. Suffragette attacks on works of art resulted in the closure of many London art galleries and museums to female visitors. Militancy often provoked confrontation with the police and public, as well as undignified scuffles and abuse. Over 1000 Suffragettes, including Emmeline Pankhurst and her daughters, served terms of imprisonment for their militancy. Most were sent to Holloway Prison where their protests continued as hunger strikes.

The outbreak of World War I brought an immediate suspension of suffragette militancy as Emmeline Pankhurst encouraged her supporters to throw themselves into the British war effort.
The tactics employed by the WSPU had failed to achieve the vote for women but, by taking their fight to the streets and making London the focus of their campaign, the Pankhursts inspired in their supporters a confidence and independence that enabled them to challenge the male dominated society in which they lived. Their campaign eased the way for women to take a more active and public role in society and during World War I - a role that was finally acknowledged with the granting of the parliamentary vote to propertied women over the age of thirty in 1918.