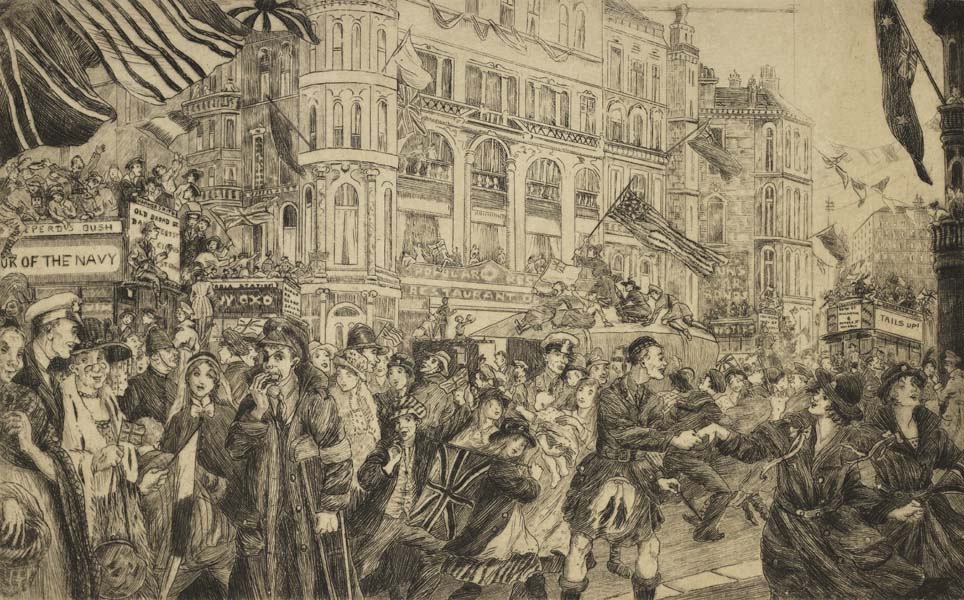 Britain declared war on Germany at 11pm on Tuesday 4 August 1914. The announcement was met with a huge and unprecedented wave of enthusiasm.

Up to 80,000 London men were already serving in Britain’s armed forces. Spurred on by propaganda, nationalist fervour and the promise of adventure, many more eagerly joined the ranks.

Government appeals for volunteers began almost immediately. Some poster campaigns urged or shamed men to enlist while others encouraged women to persuade their men to join.

However as the war dragged on and casualties mounted, increased pressure was put on ‘slackers’ who had not yet enlisted. Under the motto ‘Wake up, London!’, columns of soldiers marched through the capital to attract recruits. There were continual rallies in Trafalgar Square.

Armbands were issued to men who promised to enlist when called upon. Some women continued to distribute white feathers (a sign of cowardice) to those not in uniform. Britain’s first conscription law was passed in January 1916.

Large numbers of London’s women were also increasingly employed to work in industry, transport, agriculture and commerce as well as the civil service and non-combat military services. They successfully undertook many roles previously carried out only by men.

For the first time, London’s war economy provided full-time employment for all who needed it. The standard of living and comfort rose dramatically for working-class Londoners.

Civilians were encouraged to ‘Do Your Bit’ and ‘Carry On’. Recycling was promoted. War bonds and savings certificates were sold to finance the war effort. Voluntary organisations prepared food and clothing parcels for the Front.

London experienced a huge influx of people and resources. As the centre of Britain’s road, rail and port networks it brought men, munitions and supplies together before their transportation to France.

London’s enormous manufacturing capabilities were turned over to war production. In 1917, an explosion in a factory manufacturing T.N.T. in Silvertown, east London, caused extensive damage and loss of life.

A Blackout of London began in autumn 1914. However German airships, mainly Zeppelins, did not begin to bomb the capital until 31 May 1915. Some 600 Londoners died from German bombing raids.

London’s searchlights and anti-aircraft defences initially proved ineffective. It was not until 2 September 1916 that air defence fighters intercepted and destroyed their first airship.

The war devastated London’s extensive and deeply rooted German community. From August 1914, all Germans were registered as ‘alien enemies’.

German shops were attacked within a week of the declaration of war. There were serious anti-German riots after the Lusitania sinking in May 1915 and the bombing raids of 1917.

From October 1914, Germans and Austrians of military age were detained in internment camps. The Olympia Exhibition Hall became a makeshift prison in 1914 and Alexandra Palace held as many as 3,000 detainees.

At the end of 1917, people began to fear that London was running out of food. Panic buying led to shortages and food rationing was introduced in January 1918.

Almost every London family was affected by the death or wounding of a relative or friend. Of more than one million London men who enlisted, 131,000 (12.5%) died on active service.

In the year following the end of the war, London was also hit hard by the influenza pandemic, ‘Spanish flu’. 16,520 influenza deaths were recorded between June 1918 and May 1919.

Armistice was signed at 11am on 11 November 1918, although peace was not formally declared until 28 June 1919. London went ‘wild with delight’ when it heard the news.