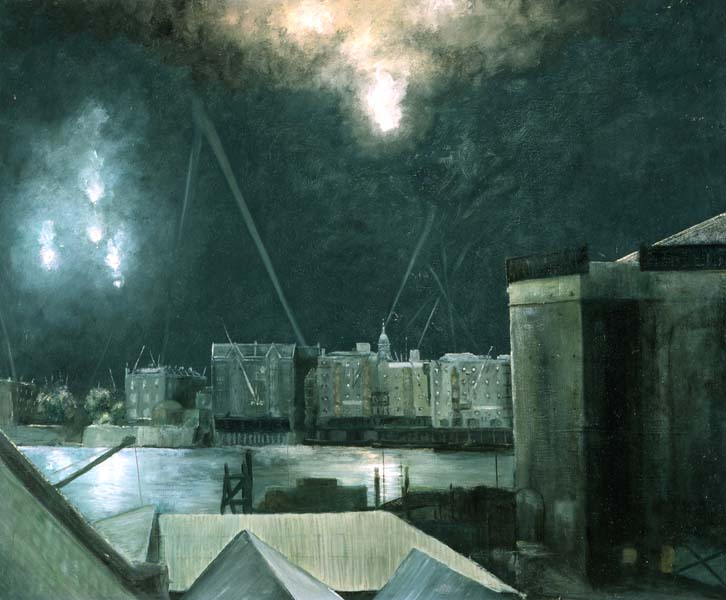 Britain declared war on Germany on 3 September 1939. Preparations for war had been in progress for some time and the government expected major air attacks on all Britain’s cities, particularly London.

Mass evacuation from London began on the day that war was declared. During August and September 1939, about 600,000 children, mothers and expectant mothers were moved into the relative safety of Kent, Sussex, Wales, Devon and Cornwall. London was not attacked early in the war and many evacuees returned. However flurries of evacuation took place after the fall of France, at the beginning of the Blitz, and with the arrival of the V1 flying bombs in 1944.

Men and women were conscripted into civil as well as military occupations on the Home Front. Civilians served as Air Raid Wardens, in the volunteer emergency services and in other critical functions.

Londoners became inventive with their sources of food. Although beef, pork and lamb were rationed, rabbit, chicken, horse and sea bird were not. Spam, processed meat, was shipped from America to supplement Londoners’ diets.

Although Londoners’ access to luxuries was severely restricted, there was a significant black market. ‘Spivs’ traded in rationed goods from questionable – often illegal – sources.

The government’s ‘Dig for Victory’ campaign encouraged people to grow more food. Every available piece of land in London was turned over to agriculture. Hyde Park had its own piggery and Kensington Gardens replaced its flowers with rows of cabbages. Nearly half the families in London had an allotment or a ‘victory garden’ to grow their own vegetables. Londoners also kept chickens for eggs and fed pigs on kitchen scraps.

All available resources were reused as people were encouraged to ‘Make do and Mend’. Schools and organisations held scrap drives and money collections to help the war effort.

Munitions of all kinds were manufactured throughout the London area in converted factories, underground railway shelters and private basements.

London’s demographics changed dramatically. Refugees flooded in from war-torn Europe. Servicemen from the United States and the commonwealth arrived in their thousands, particularly once preparations began for an Allied invasion of Europe.

Throughout the war, the government encouraged the impression that in London there was ‘business as usual’. The Ministry of Information reported that, despite the devastation of the Blitz, ‘London, heart of the British Empire, still beats strongly and undismayed’. This propaganda contained an element of truth. Despite the attacks, Londoners still turned up for work and carried on with their lives as best they could.

The Second World War ended in Europe on 8 May 1945 and in the Pacific on 15 August. After celebrations, London began the slow and difficult process of recovery.