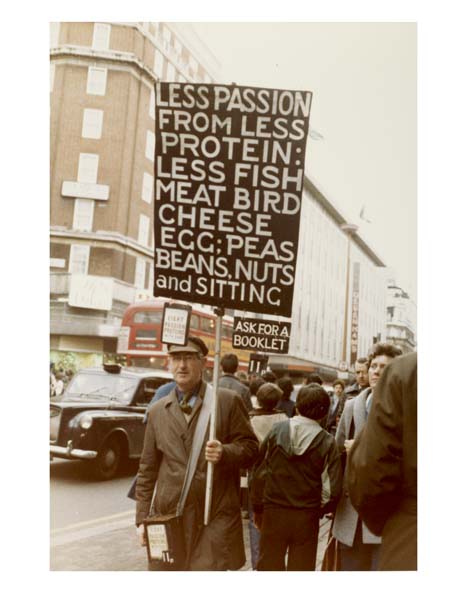 From 1968 until his death in 1993, Stanley Green was seen daily in Oxford Street, striding through the crowds with a placard warning people against eating too much protein. Protein, he believed, made people uncontrollably passionate and was a source of anarchy in the world.

Stanley Green, the son of May and Richard Green, was born in Tottenham on 22 February 1915. His father was a clerk. The family moved to Ealing after the First World War where Stanley, one of four brothers, spent an outwardly unremarkable childhood. He grew into a difficult character, never managing to settle in a job. He did not marry, and lived with his parents in a council flat in Ealing for most of his life.

It was after his mother’s death in 1967 that Stanley began his campaign against eating protein. Every day he travelled to central London to spread his message to as wide an audience as possible. He carried a homemade placard and sold his self-published booklets, ‘Eight Passion Proteins. With Care’, that were printed on a small printing press he set up in his front room. The booklet ran to 84 versions, each with an ever-more jumbled text about biological rhythms, sexual abstinence and carnal passions.

Stanley Green spent his evenings writing letters to public figures, among them the Archbishop of Canterbury and the Director General of the B.B.C. ‘Protein Wisdom would not reduce your circulation and it might increase it!’, he told the editor of The Times newspaper. He asked Prime Minister John Major: ‘will your government be yet another that will promote sexual promiscuity among young people?’, referring to the AIDS campaign. He wrote to Edwina Currie about eggs and, often, to Mrs Thatcher, whom he believed had secretly started to practise Protein Wisdom.

Many people wrote to him, often with affection. ‘Dear Mr Green,’ wrote one correspondent, ‘I read your interesting pamphlet tonight and whilst I find it most intriguing, I must confess that some of the points raised do need some clarification .... I experimented with your methods for a period of time last month – my rhythm appears unchanged and, far from my Sundays being altered I have had only three Mondays this calendar month. Is my personal month your personal month or is impersonality the truth of the varying effects of your method. Have I been unworthy? Will I be, could I not have been about to, should I ought to have been in the process of attempting to? Yours sincerely, lots of love ...’.

‘Protein Man’ was a figure of affection to many Londoners. In 1975, he was enrolled in the Brixton Workers Defence Unit. ‘Keep up the good work’, said the letter from the ‘Unit Commander’, enclosing his membership card. In 1988, Bartle Bogle Hegarty used him to promote the Campaign Poster Advertising Awards. The British Library regularly wrote requesting the latest edition of ‘Eight Passion Proteins’. Green appeared on countless foreign television programmes as an example of British eccentricity.

Green lived frugally, practising what he preached by restricting his intake of protein to no more than half a boiled egg a day. He died in 1993 and his brother donated his placards, diaries and papers to the Museum of London. His printing press is in the collection of Gunnersbury Museum in Ealing.