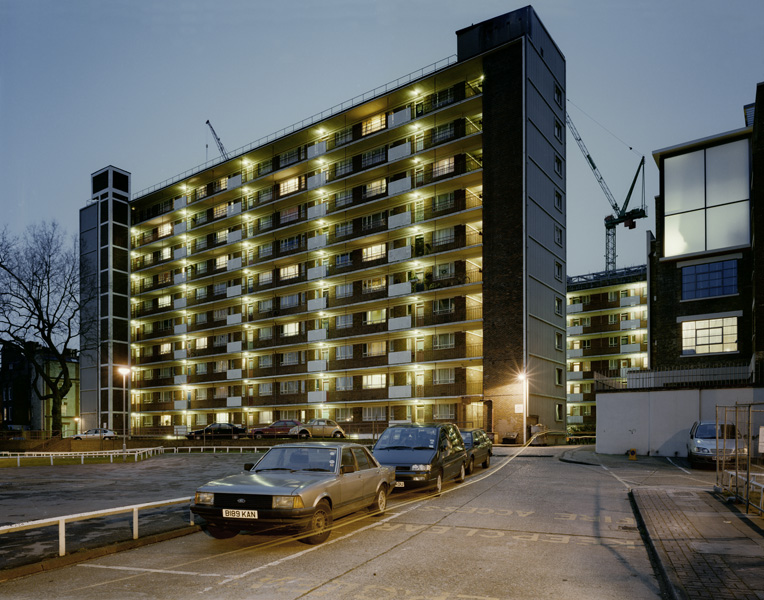 Mike Seaborne, a documentary and urban landscape photographer, came to photography through his boyhood interest in railways. He was taught how to ‘see’ with a camera through evening classes held at his local school in Leicester by the renowned railway photographer and writer, Colin Garrett. Later, whilst studying for a Degree at Leeds University in Philosophy and the History of Scientific Thought, he discovered the work of Colin Gifford. ‘Decline of Steam’, Gifford’s seminal photographic book, showed Seaborne the documentary possibilities of picturing the subject in the wider social and environmental context.

Seaborne began photographing in London after joining the curatorial team at the Museum of London in September 1979. Whilst exploring the old industrial areas of the capital, he discovered the Isle of Dogs and the derelict West India and Millwall Docks. Soon to be designated ‘Docklands’, this part of London was clearly on the verge of being transformed, and Seaborne set about documenting the landscape before it disappeared forever.

In 1984, he teamed up with the Island History Project (I.H.P), a community-based organisation dedicated to recovering the history of the area. Seaborne obtained a Greater London Council grant to undertake a photographic project documenting life and work on the Isle of Dogs before the developers moved in. This project lasted for over a year and resulted in a large body of photographs. These provided the basis for a travelling exhibition, East Enders: The Final Episode? (1986). The photographs were subsequently archived by the I.H.P. as the Picture It Now collection.

In the late 1980s, Seaborne switched from shooting mainly 35-millimetre black and white to medium-format colour, since developments in colour printing technology allowed new possibilities. He then moved to a large-format camera (5 x 4 inches, or 12.5 x 10 centimetres) and developed a more reflective approach to photographing the urban landscape.

He was particularly inspired by the work of contemporary American colour photographers Joel Meyerowitz, Stephen Shore, Joel Sternfeld and Len Jenshel. Their approaches appeared to Seaborne to be the perfect marriage of eye-catching, sensual colour and documentary intent, with a clear message about the impact of people on the environment.

Colour social-landscape photography dominated Seaborne’s work in the 1990s and he focused his attention on several major projects. These included Transport in London, with the London Documentary Photographers Group, exhibited in 1992; London’s Riverscape: Lost and Found, undertaken in 1997 to create a continuous photographic panorama of the Thames from London Bridge to Greenwich to compare with one photographed for the Port of London Authority in 1937; Tower Blocks: Love Them or Loath Them, concerning post-war social housing, exhibited in 1999; and Re-Inventing the High Street, an exhibition about shopping centres mounted in 2000.

In 1995 Seaborne, senior curator of photographs the Museum of London, curated its major exhibition, Photographers’ London: 1839–1994. He also wrote the accompanying book of the same name. He left the museum shortly afterwards.