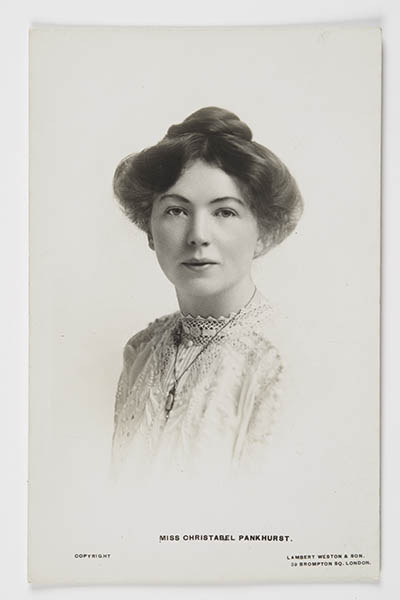 Christabel Pankhurst was the daughter of radical barrister Richard Marsden Pankhurst and feminist campaigner Emmeline Goulden. Their house in Russell Square was a gathering-place of London’s reformers, free-thinkers and socialists, inspiring the young Christabel to remark to her mother: “How long you women have been trying for the vote. For my part, I mean to get it.”

Christabel Pankhurst received a first-class degree in law from Victoria University, Manchester. As a woman, however, she was not permitted to practise as a lawyer. She lectured up and down the country on the subject of female suffrage as a member of the Independent Labour Party, but was disappointed by their lukewarm response to the “women question”.

In 1903 she co-founded the Women's Social and Political Union along with her Mother, Emmeline and sisters Adela and Sylvia. From 1903 until 1914 Christabel devoted her energies to the Suffragette campaign and quickly established herself as Organising Secretary of the Women's Social and Political Union. Taking as their motto “Deeds, not words”, the WSPU was women-only and rejected party political association to campaign on the single issue of women’s suffrage. Christabel’s decision, as chief organiser of the union, to campaign against Labour-party parliamentary candidates, as well as Liberal and Conservative ones, was opposed by her sisters Sylvia and Adela Pankhurst. Christabel remained suspicious of allying the WSPU with the broader socialist movement all her life.

She was a brilliant speaker and popular leader who could inspire great loyalty, particularly amongst the young women who followed the Suffragette cause. Along with Annie Kenney Christabel was the first Suffragette to serve a term of imprisonment for militancy when, in 1905, they interrupted a Liberal meeting at the Free Trade Hall in Manchester demanding to know when the Liberal Party would give women the vote. Dragged outside the hall, Christabel deliberately courted arrest by spitting at a policeman – a technical offence of assault – and chose prison rather than paying the fine. Media attention poured in and minor acts of civil disobedience became a key tactic of the WSPU.

Christabel acted as lawyer for herself, her mother Emmeline and suffragette Flora Drummond when all three were charged with breach of the peace in October 1908. They had helped organise the “Trojan Horse” raid on the House of Commons that February. Christabel’s nerve and wit – she called two cabinet ministers as witnesses for the trio – established her as a celebrity. Driven, as she saw it, by parliamentary deceit and intransigence, Christabel and her mother Emmeline increased the militancy of WSPU tactics with a campaign of window-breaking and other vandalism in 1912.
Christabel had served prison sentences in 1907 and 1908, but fled London for exile in Paris in March 1912 to avoid charges of conspiracy. From Paris she continued to lead the WSPU and edit the organisation’s newspaper The Suffragette. She returned to England on the outbreak of World War I after the government had released all suffragette prisoners. On August 12 1914 Christabel pronounced a pause to the votes for women campaign to support the British government during the war.

In anticipation of women being granted the vote, Christabel and Emmeline reformed the WSPU as the Women’s Party in 1917. Christabel failed to become the first female MP in the December 1918 election, and the party was dissolved in 1919. In 1921 Christabel moved to Canada and then California where she concentrated on her fervent religious belief in Second Adventism.