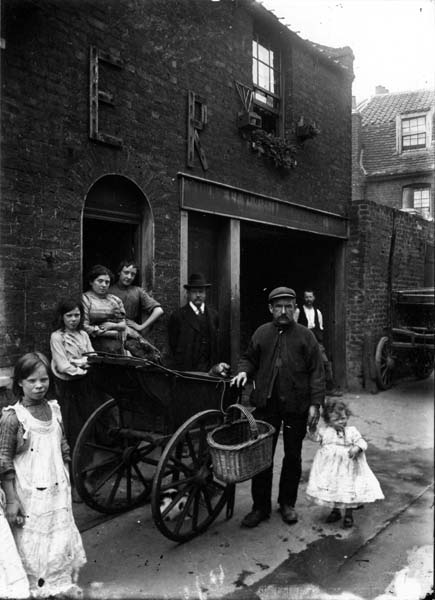 John Galt was a missionary whose commitment to the London City Mission compelled him to produce powerful photographs of the East End.

Galt was born in Elgin, Morayshire. After school, he was apprenticed to a local draper. A few years later, he moved to London, where he worked in the profitable West End textile industry.

However, distressed by the exploitation of cheap labour he witnessed in East End sweatshops, and driven by his religion, Galt applied for missionary service in the Congo. He was rejected on medical grounds, so channelled his Christian devotion into the Baptist Forward Movement instead. At 26, Galt had joined the London City Mission as a probationer.

In 1890, as a full missionary, Galt was assigned to the Tent Street Mission, Bethnal Green. This was one of several mission houses for London City Mission activities, and Galt was one of over 100 missionaries dedicated to its cause.

When his Mission closed a few years later, Galt transferred to Poplar. With his new wife, Frances Jackson, he began to tackle the surrounding poverty. The extraordinary hardships caused by the 1893–4 winter, when the Thames froze and the docks ground to a halt, forcing many locals out of work, prompted the initiation of a relief fund.

To raise money for Mission operations, missionaries travelled the country approaching churches for donations. Galt made many such journeys in the early 1900s.

In Poplar, Galt did a lot of public speaking before undertaking a new role as Special Missionary to London Cabmen in 1902. The Mission sought to reach the poor and convert them through home visits and missionary engagement with particular areas of employment including cabmen, firemen, and general post office workers.

Galt made extensive notes about his experiences as a missionary and these were published by the Religious Tract Society. He also produced manuscripts explaining his views of the East End and describing the lives he encountered. One was titled ‘Saints in the Slum’, giving a clue to his sympathies, which he also expressed through his photography.

Galt illustrated his talks and lectures and promoted the Mission’s work with his glass lantern slides. A number were featured in the Mission magazine between 1902 and 1905. The photographs were concerned with social conditions and ranged from home workers in Bethnal Green to the Mission’s open-air preaching in Woolwich Arsenal. Galt hoped to show that those living in poverty in the East End were not a lower species, but ordinary people trying to scrape by.

In 1907, Galt and his family left England to seek a better climate for their sick son, Ian. Financially assisted by the Mission, the family emigrated to Canada. There, Galt held nine pastorates within the Baptist Convention of Ontario and Quebec. He died in Toronto in 1942.

Galt’s family in Canada have 67 of Galt’s photographs that survive as lantern slides. Identical sets of copy prints were given to the London City Mission and the Museum of London.