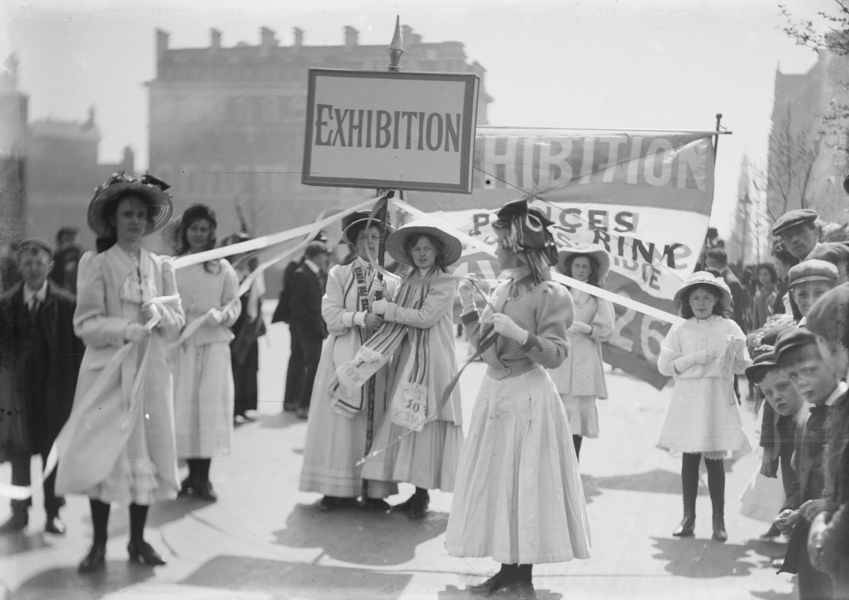 Born Christina Livingstone, and educated in Claremont, Margate, Mrs Albert Broom made a relatively late start as a photographer. In May 1903, at the age of 40, Broom used a borrowed plate box camera to photograph the Prince and Princess of Wales opening the new tramways at Westminster.

Inspired by her results, she took a camera to Epsom on Derby Day and managed to obtain permission to photograph one of the competing horses. The horse later won, and Broom realised that photography was a way of earning a living. Since her husband, Albert, had been permanently injured in an accident, the need for an income was pressing. Christina bought a half-plate camera and set out to produce photographic postcards of local scenes.

Her earliest images were topographical views of London, but in 1904 she became official photographer to H.M. Household Brigade, a role she kept until her death.

Between 1908 and the First World War, she captured the demonstrations, marches and events of the suffragette movement. Broom recorded the suffrage cause through striking photographs that she made into postcards for sale at Women’s Social and Political Union shops countrywide.

Broom’s suffragette photography is arguably her best, but her other work includes a detailed record of 30 years of the Cambridge and Oxford boat races, the first women police, Nurse Cavell’s funeral, Shackleton aboard Nimrod, the funeral of King Edward VII, the coronation of George V and portraits of other royal and titled dignitaries.

Her daughter Winifred worked as an assistant in the business until her mother’s death. Despite wishing to continue in her mother’s footsteps, Winifred eventually closed the business and turned to nursing. Queen Mary, encountering Winifred at a sale of Christina’s work, suggested that the original works be preserved in museum collections rather than stored in bank vaults.

As a result, several public institutions were given Mrs Broom’s original glass negatives, including the National Portrait Gallery, the Imperial War Museum and the Museum of London.