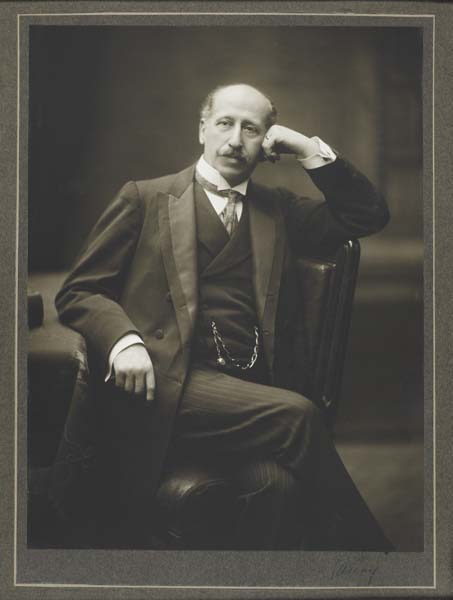 Imre Kiralfy was a dancer, impresario of spectacular entertainment and director of international exhibitions. He created two state-of-the-art 'White Cities' in London, which achieved social respectability, popularity and profitability by combining culture, technology, pleasure and the exotic on a grand scale. Kiralfy was a cosmopolitan Hungarian who became a naturalised British citizen in 1901.

Imre Kiralfy was born in the city of Pest in 1845. He was the oldest of the seven children of Jacob Konigsbaum and his wife Anna (Rosa) Weisberger. They were a prosperous family of Jewish descent. The Konigsbaum clothing business was ruined in the 1848 Hungarian Revolution, plunging the family into poverty.

Imre made his stage debut at the age of four as a Hungarian folk dancer, appearing under the name Kiralfy. Imre’s brother, Bolossy (1848–1932), soon joined him on stage. The family moved to Berlin and then to Paris. There the critic Theophile Gautier praised Imre and Bolossy for their ‘agility, quickness, lack of affectation, strength and musicality’. Eventually five of Imre’s six siblings joined him on stage, performing in Britain, France and the Low Countries.

The family was in Paris during the 1867 International Exhibition, the first of many exhibitions Imre visited. In Brussels, Imre and Bolossy organised the pageantry and sports of a royal summer fete in 1868.
Imre married Englishwoman Marie Graham (1851–1942) in New York in 1872. She was one of the dancers who had sailed to the United State with the Kiralfy family two years earlier. Imre and Marie had nine children, but three died in childhood.

For the Kiralfy brothers, the United States was the land of opportunity. They became famous producers of extravagant, dance-based spectacles. Their shows, such as the long-running version of Jules Verne’s Around the World in 80 Days, featured female chorus lines, high-quality sets and costumes that were usually made in Europe, and innovative special effects. Professional and personal differences led to the Kiralfy brothers’ becoming estranged rivals in 1887.

In 1887 Imre brought The Fall of Babylon to Staten Island. He next produced Nero, or The Fall of Rome in New York, and then in London’s Olympia. Again at Olympia, in 1891, Imre created Venice in London, a combined spectacular play and exhibition, replicating Venice’s bridges, canals and a glass factory.

Imre and his son Charles created the spectacle America for the vast Auditorium Theatre in Chicago, to coincide with the 1893 World’s Columbian Exposition. America was a critical and box-office success, grossing $900,000 in its seven-month run. Imre returned to London and rebuilt the Earl’s Court exhibition grounds as a small-scale version of Chicago’s White City in 1893. It included a Ferris wheel, amusement park and palatial exhibition halls in a Mogul Indian style. At night it was an electrically illuminated wonderland.

The Empire of India Exhibition of 1895 reopened in Earl’s Court, and prestigious, imperial or international exhibitions followed annually. In the late 1890s, Imre developed close links with the British Empire League and became a senior Freemason.

By 1905 Imre’s vision had outgrown Earl’s Court and he was planning the Great White City at Shepherd’s Bush. Built in a palatial oriental style, it opened in 1908 with the Franco-British Exhibition. Eight million people visited, including King Edward VII and the President of France.

The Olympic Games were also held at White City in 1908, in the purpose-built stadium. This represented the peak of Imre’s career and he was acknowledged as an impresario and exhibition director of genius. The Anglo-American Exhibition of 1914 was the last international exhibition to be held at White City, although the sports stadium remained in use until 1984.