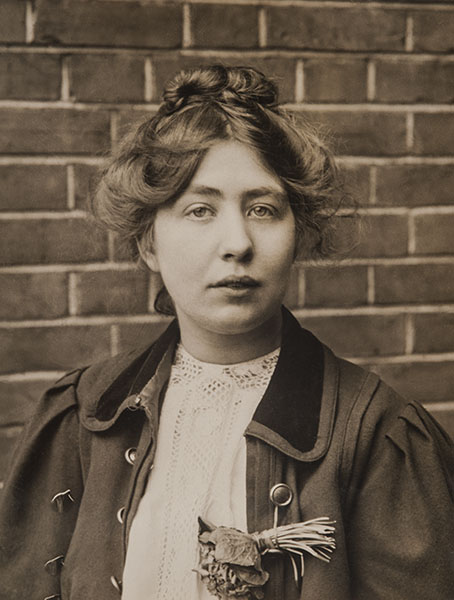 Estelle Sylvia Pankhurst, commonly known as Sylvia, was a notable activist for women's suffrage alongside her mother Emmeline and her sisters Christabel and Adela. Unlike Emmeline and Christabel, she was active in broader left-wing politics, including communism and anti-fascism.

Her art work and imagery gave the Suffragette campaign a clear visual identity, and can be seen on badges and leaflets produced by the Women's Social and Political campaign. Her designs, notably for the fundraising Women's Exhibitions, became an iconic part of the WSPU fight for women's suffrage.

Sylvia and Amy Bull founded the East London Federation of the WSPU. Sylvia also contributed articles to the WSPU's newspaper, Votes for Women and, in 1911, she published a propagandist history of the WSPU's campaign, The Suffragette: The History of the Women's Militant Suffrage Movement.

Sylvia was imprisoned many times for her involvement in the militant campaign, the first in October 1906 on a charge of obstruction. She endured months of hunger, thirst and sleep strikes in Holloway prison. But her interest and concern for the lives of working class women brought her into conflict with her mother Emmeline and her sister Christabel.

In contrast to Emmeline and Christabel, Sylvia retained an affiliation with the labour movement and was a member of the Independent Labour Party. By 1914, Sylvia had many disagreements with the route the WSPU was taking. It had been founded explicitly independent of any political party, but Sylvia wanted it to become a socialist organisation tackling wider issues than women's suffrage, and aligned with the labour movement.

Emmeline and Christabel disapproved when Sylvia founded the East London Federation of Suffragettes, and expelled her from the WSPU. Sylvia in turn was shocked by the WSPU's support for the British government during the First World War. Sylvia, and her political group, renamed the Worker's Suffrage Federation in 1916, supported the International Women's Peace Congress and helped to hide concientious objectors from the police. She quickly became involved with the British communist movement after the war, becoming an advocate of 'left communism' and renaming the newspaper she published from the Women's Dreadnought to the Worker's Dreadnought.

This political shift, combined with Sylvia's refusal to marry the father of her child because she would have had to take his name, led to a complete break with her mother in 1927. After the birth of her son Richard, with the Italian anarchist Silvio Corio, Syvlia and Emmeline never spoke again. In the 1930s Sylvia became heavily involved in anti-fascist and anti-colonial movements, notably those opposing the Italian invasion of Ethiopia in 1936. She lived in Addis Ababa after the Second World War, dying at the age of 78 and receiving a full state funeral from the Emperor of Ethiopia, Haile Selassie.